I’ve just cut the first ten pages of my script, the ones that set up my main character.  It feels like I’ve just cut her head off.  First you set up the character, their world and their problem or goal… Or do you? 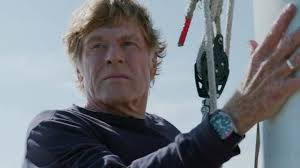 All we know about Robert Redford in the brilliant movie All is Lost is that he is Our Man. He has no past. At least not one we are party to.  No reason to be castaway at sea, risking everything to stay alive. Why should we care if we don’t know who he is and what he stands for? But we do know. His actions tell us who he is, that and his reaction to what happens to him. The purest kind of storytelling plays out in forward motion, or as actors say, in the moment.  Not in the remembered past, or the imagined future but right here, right now.

My favourite moment in ‘All is Lost’ is when Redford finds a card in with a navigating set still in its gift box. He flips the card over and we believe we’re going to find out who gave him the gift, his wife perhaps or a lost loved one and with it the reason he is out there alone.  For a moment he considers – and then decides not to open the card.  As we create our own meaning from that small gesture, we are with him in his universe in a way no amount of spelled out backstory or clever set up could ever make us feel.

When establishing characters, we follow and teach what works in so many movies because it orients us and makes us feel safe.  That is not to say the writer must not rigorously research and get to know their characters, you have to live with them, to know what they want and fear, whom they love and how they speak, move and behave. But in the end you have to let them go again.  They should be unknowable for you and the audience the first time we see them on film.

One of my favourite movie openings of all time is Travis lost in the desert in Paris, Texas.

We spend hours following his journey with very little idea of what he’s doing and why until the very end when he reveals the event that drove him into the wilderness.

We love a wounded hero but do we always need to know who did the damage?

In Shane you never know why he is so reluctant to draw his gun. You just know it must have been a terrible thing.

To start with a character fresh and unknown and plunge them into a world they don’t know and against elements they have no control over mirrors our deepest fears and dreams.  We have no handbook or script telling us how to live our lives or how we got here.  Nor do they.  And so together we work it out.

Who are your favourite characters and how do they first appear? Leave a message below or contact me @emlin32 on twitter.

4 thoughts on “All is Lost – The Mysterious Hero”